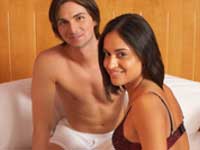 The concept of 'technical virginity' amongst teenagers is not as common as believed. In fact, a new survey has revealed that teenagers do not opt for oral sex as a way to preserve their virginity. After analysing a federal survey of more than 2,200 males and females aged 15 to 19, it was found that over 50 percent of them engaged in oral sex. But the practice of oral sex was more common in those who had had intercourse as compared to those claiming to be virgins.

"There's a popular perception that teens are engaging in serial oral sex as a strategy to avoid vaginal intercourse. Our research suggests that's a misperception," Washingtonpost.com quoted Rachel Jones of the Guttmacher Institute, a private, nonprofit research organization based in , who helped do the study, as saying.

The findings revealed that teens were more likely to become sexually active in many ways around the same time. For example, while only 1 in 4 teenage virgins opted for oral sex, more than 4 out of 5 teenagers reported to have tried it within six months after their first intercourse "That suggests that oral and vaginal sex are closely linked. Most teens don't have oral sex until they have had vaginal sex," said Jones.

Those who advocate sex-education programs that focus on abstinence said that the results of the study threw light on the debate that the approach was accidentally encouraging more teens to go for oral sex, which still carries the risk of sexually transmitted disease, for preserving their virginity.

It was suggested in an earlier research that oral sex was gaining popularity among teenagers as an alternative to intercourse. However, the studies were based on small samples or anecdotal reports. But, the new study analysed data collected from a nationally representative sample of 1,150 females and 1,121 males aged 15 to 19 who were questioned in detail in 2002 for the federal government's National Survey of Family Growth.

However, Jones indicated that they could not find which sexual activity was more likely to occur first. While examining the number of partners the teens reported, the researchers found that among those who reported engaging in oral sex, 67 percent had only one partner, "another piece of evidence that there's not a lot of teens engaging in serial oral sex," said Jones. The findings of the study will be published in the latest issue of the Journal of Adolescent Health.