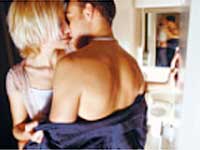 Majority of the young adults in US think that oral sex is not really a lovemaking, says a survey conducted between the undergraduate college students.

Majority of the youngsters agree that penile-vaginal intercourse is sex. But less than one in five think that oral-genital contact can be counted as 'having sex'. Males were much more likely than females to admit that sex included touching and stimulating partner's genitals, breasts or nipples.

The survey involved 477 undergraduate students, mostly white heterosexual females, enrolled in a human sexuality class. The survey found that only 20 percent of those surveyed said oral contact with their partner's genitals would constitute sex. Less than 80 percent of participants considered penile-anal intercourse as sex.

In 1991, a similar survey conducted could find that 40 percent would classify oral-genital contact as sex. The attitude towards oral sex represents a dramatic and sudden shift with in a decade, says the experts.

They also call this attitude shift as &ldquo;Clinton-Lewinsky" effect, as the former president who got trapped in the sex scandal had made a statement that he was not involved with her in a sexual relationship. The experts point it out as a pivotal turning point in society's changing views about oral sex.

"Like President Clinton, adolescents and young adults often interpret these words with a degree of latitude, depending on whether they want to maintain an image of being sexually experienced or inexperienced," says Jason D. Hans and colleagues at the University of Kentucky, Lexington.

They say that a surge in the abstinence-only education and sex education programs which focus primarily on vaginal-penile intercourse may play a role in the disassociation of oral-genital stimulation from sex.

The rise in abstinence-only education and sex education programs that focus primarily on vaginal-penile intercourse also may play a role in the disassociation of oral-genital stimulation from sex, says the researchers.
The article will be published in the Perspectives on Sexual and Reproductive Health.

'Technical Virginity' Amongst Teenagers Is A Myth