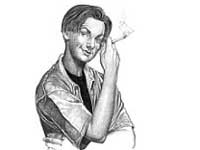 Teens with a history of crack or cocaine are at an increased risk for HIV than youth who have never used these drugs, claims a new study.

The study has been published in the April issue of the Journal of Child and Adolescent Substance Abuse.

Bradley Hasbro Children's Research Center report that teens in psychiatric care who used crack or cocaine at least once were six times more likely to use condoms inconsistently, which was defined as "sometimes,never or rarely."

The findings suggest that crack cocaine appears to have more of an influence on risky teen behaviours than other factors, like alcohol and marijuana use, which are more routinely incorporated into adolescent HIV prevention interventions.

"Unprotected sex is the most common way that HIV is transmitted among teens, so if we can develop a clearer picture of why some kids engage in high-risk sexual behaviors, we will be better prepared to educate them about safe sex," says lead author Marina Tolou-Shams.

The findings suggest that future HIV prevention interventions should include content specific to crack and cocaine use, just as they do with drugs that are more commonly used by teens, like alcohol and marijuana.

Overall, nearly 280 teens between the ages of 13 and 18 from therapeutic psychiatric day programs took part in the study. Participants exhibited a range of psychiatric diagnoses, including mood disorders, post-traumatic stress disorder and disruptive behavior disorders. More than half of all adolescents were male, and more than three-quarters were Caucasian.

Approximately 13 per cent of teens in the study reported trying crack or cocaine at least once.

After controlling for known adolescent HIV risk factors, such as gender, race, age and psychiatric status, researchers found that only 47 per cent of teens with a history of crack or cocaine use said they used condoms "always or almost always."

15 per cent of these adolescents have a history of sexually transmitted diseases (STD), nearly three-quarters reported using alcohol at least once and more than half indicated prior marijuana use.

In comparison, 71 per cent of teens who never used crack or cocaine reported using condoms consistently.