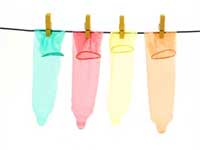 The BBC World Service Trust has launched a ringtone campaign to promote the use of condoms in India, where about 2.5 million people are living with HIV.

The central message of the "condom condom" campaign being run on radio, TV and the Internet is that "smart men use condoms".

A scene in the TV ad, a mobile ringtone buzzes with a loud refrain "condom! condom!" during a wedding.

Though the man holding the mobile feels it embarrassing, those around him consider him to be a smart and responsible person.

The campaign's theme Jo Samjha Wohi Sikander (the one who understands is a winner) reinforces the message that those who use condoms are winners in life.

"Ringtones have become such personal statements that a specially created condom ringtone seemed just the right way of combining a practical message with a fun approach. We have always had a strong interactive, response-led component in this ongoing campaign. This downloadable ringtone provides an opportunity for our audience to translate a message into an action. The idea is to tackle the inhibitions and taboos that can be associated with condoms," the BBC quoted Radharani Mitra, Creative Director of the BBC World Service Trust India, as saying as she described the thinking behind the campaign.

This ongoing multi-media campaign will reach an over 100 million people in India.

The "condom condom" campaign is part of a two-year project to encourage more widespread use of condoms.

It started in 2007 with a three-week contest reaching over 100 million people in four Indian states.

Nearly 400,000 calls were made by people responding to TV, radio and outdoor advertisements to participate in the contest.

The Bill and Melinda Gates' Foundation provided financial support for the campaign.