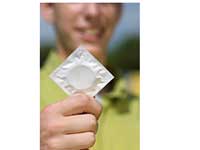 With the festive mood in the air, couples are in for a sweet treat in bed. Thanks to new mince pie-flavoured condoms.

A new flavoured condom has been launched to encourage safer act of lovemaking over the holiday season.

A survey shows that one third of British end up in bed with a colleague or even their boss at alcohol-fuelled parties and one in every ten have unprotected lovemaking.

Richard Cox, who developed the new flavour, said they were trying to make safe lovemaking fun.

They even rejected a few tastes, including turkey and even sprouts!