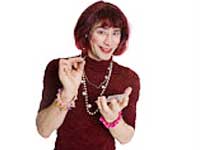 Sex workers and transgenders in Mysore, Karnataka are running a restaurant and serve traditional south Indian food to guests to raise funds for HIV positive people and to fight against the social stigma associated with this section of people.

Ashodaya, a small restaurant, opened in Mysore, is an enterprise run by 12 males and female sex workers and transgenders. It was opened with the aim of reducing social discrimination and the social stigma attached with the group.

Opened as part of the World Bank's entrepreneurial initiatives, the name. Ashodaya, maens 'Dawn of Hope'. The hotel was inaugurated on the occasion of World AIDS Day. The profit earned from this hotel is used for treating HIV positive members of the organisation.

As a general belief, people avoided those who are either sex workers or are HIV positive. &ldquo;People have gradually started coming to our hotel. They sit and eat together. They shared our problems. In this way we are trying to reduce the social stigma and discrimination that we face," says Prathima, a sex worker working at the Ashodaya.