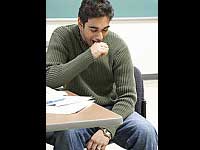 Experts say that yawning doesn't happen only because of lack of oxygen, it can happen due to factors like stress, Interest and sexual desire.

Academics from different parts of the world like The U.S, India, Europe and the Middle East attended the International Conference on Yawning and discussed on topics like yawing over a life span, yawning in non-human primates and the theory of the hidden sexuality of the yawn.

"We can send a man to the moon but we cannot explain this most trivial of acts," Dutch academic and author Wolter Seuntjens said.

Wolter is the father of this theory that some forms of yawning sends out sexual messages. So next time when you yawn don't say it's because of lack of oxygen, it could be due to sexual desire as well.