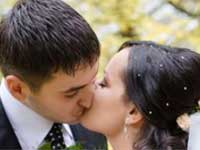 If you think mating rituals, like foreplay and kissing techniques are something very humane then think again. Here are some of the strange mating rituals of animals, birds, worms and insects that will make you travel to the land of fantasy.

Garden Snails- Value Foreplay
Garden snails follow ritual that can be termed in one phrase as 'Seductive lovemaking'. Here one snail woos another by circling it for fifteen minutes to six hours. During this process both of them touch each others tentacles and bite lips and genitals. Pressure builds in snail A's genitals, which houses a 'love dart'. When snail B touches snail A's genitals, the he-she gets punctured with the dart. The other snail fires back, each dart releasing a chemical preventing the snail from digesting the sperm. Did you ever imagine that slow creepy creatures like these can ever value foreplay to seduce their partners for hours.

Grasshoppers- Serenade for love
Many of us may think singing and dancing to win the love of a partner is something 'not in my books' type. However male grasshoppers value their mating songs. A male grasshopper has 400 mating songs in his repertoire! And what more each grasshopper song has unique mating call, for instance if one means to flirt, the other welcomes for a steaming session.

Lynx Spiders- You are my feast darling!!!
At the end of the story you may feel female lynx spiders as rape victims, but for them it is just another lovemaking session. Male lynx spiders literally tangle their mates in their silken web. He later unwraps her and distracts her with the feast of insects in the web. As she eats, he mounts her to satisfy his sexual drive. Hungry female lynx lets the captor to do his will as she satisfies her pleasure and her stomach.

White-fronted parrots - Excel Kissing techniques
Here is the only species besides humans who master the art of kissing techniques. These birds are native to Mexico and Central America. Before mating, they lock their beaks and gently flick their tongues together. If the foreplay act satisfies both the partners the male boldly takes the next step, by regurgitating his food for his girlfriend, to show his love. Researchers state that white-fronted parrots also share parenting, unlike many other species. When the female lays her one egg, both parents take turns incubating it. When the baby hatches, the couple feed and care for their offspring together. How humane!

Penguins - Monogamous for a year
Penguins are termed as monogamous animals. When they fall in love the couple stand breast to breast with their heads thrown back, singing loudly with outstretched, trembling flippers. Imagine two lovers on an icy land sharing the warmth of love. Truly romantic!! Two weeks later, the male shows his urge by laying his head upon his partner's stomach (Will you bear my baby, darling?). The two then find a secluded spot for an actual intercourse process for not more than three minutes. After a sensual lovemaking neither of the two will mate again for a year.

Hippos - Spread the fragrance of love
Hippos attract their mates by using aromatherapy. They make a territory of their own by urinating and defecating simultaneously. After the seductive aroma spreads around the hippo twirls its tail like a propeller, spreading his mess everywhere - irresistible to the opposite sex. This attracts lovers, and a pair will begin foreplay, which consists of playing by splashing around in the water before settling down to lovemaking business.

Homosexuals - Not Forbidden
Its not just humans who are attracted to the same sex. Here are two birds who act like gays and lesbians. Male geese like male geese. However, during mating season a female will waddle her way between two courting males and be quickly fertilised. After few weeks when the tiny goslings are born the two papa's go to visit them often.

If Geese practice the gay love Seagulls opt for the lesbian act. A research states that lesbian mating is practiced by between 8% and 14% of all Californian sea gulls. They go through the motions of courting and lay sterile eggs Homosexual behaviour is also seen in ostriches, cichlid fish, squid, rats and monkeys.

Tips To Give A Sexy Blow Job

Use Mouth To Spice Up Sex