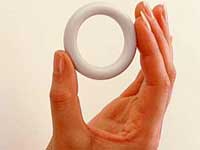 An Indian-origin scientist at Weill Cornell Medical College say that a novel contraceptive may also prove effective in blocking the transmission of the HIV virus. Dr. Brij Saxena, the Harold and Percy Uris Professor of Reproductive Biology and professor of Endocrinology, has revealed that the device is a vaginal ring that releases multiple types of non-hormonal agents and microbicides, which can prevent conception as well as sexually transmitted HIV infection. He says that the device has been found to prevent infection by the HIV virus in laboratory testing.

If proven successful in future clinical trials, according to Saxena, the new device could empower women to effectively and conveniently protect themselves from unintended pregnancy and sexually transmitted infection. The researcher reckons that the ring may also someday represent a novel method to prevent STIs for those with aversion to currently available methods, with hormonally derived active agents, or with allergies to latex condoms. "This device is a new approach to birth control, because it avoids the long-term use of hormonal methods that have been associated with increased risk of certain cancers. At the same time, this is the first device to simultaneously offer the possibility to prevent unintended pregnancy and HIV transmission," says Saxena.

Dr. Jeffrey Laurence, co-author of the study and attending physician at NewYork-Presbyterian Hospital/Weill Cornell Medical Center, said: "No one has ever conquered a viral epidemic with treatment, so prevention is the most effective option. Ideally, an HIV vaccine is the most desirable method, but that is not foreseeable in the near future. The next best thing would be something that would prevent infection and put the power in the susceptible female partner's control. That's the potential a device such as this can offer."

Saxena points out that the vaginally inserted ring is incorporated with multiple antiviral drugs that prevent HIV infection, and are time-released over a period up to 28 days. "The combination of the antiviral drugs has proven to be potent agents that may block infection by the HIV virus," he says.

The ring is also incorporated with compounds that prevent conception by arresting sperm motility, raising vaginal mucous viscosity, and sustaining the acidity of the vagina in which sperm do not survive. "The compounds in the device are natural materials that are already approved by the U.S. Food and Drug Administration for use in humans," says Saxena.

A research article on their study has been published in the journal AIDS.