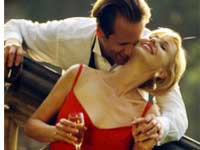 Young people in Europe are deliberately binging on drink and drugs to enhance their sex lives, according to a new study. A third of men aged 16 to 35 and a quarter of females surveyed for the study said they drank alcohol to increase their chances of getting sex.

Some also intentionally take cocaine, ecstasy and cannabis to enhance sexual arousal or prolong sex. In the study, conducted by researchers at the Liverpool John Moores University, more than 1300 people aged between 16 and 35 and who routinely socialize in nightlife settings completed anonymous questionnaires.

Researchers found that virtually all of the survey participants had drunk alcohol with most having had their first drink when 14 or 15 years old. They found that three quarters of the respondents had tried or used cannabis, while around 30 percent had at least tried ecstasy or cocaine.

Overall, the analysis of the study showed that alcohol was most likely to be used to facilitate a sexual encounter, while cocaine and cannabis were more likely to be utilized to enhance sexual sensations and arousal. Besides this, researchers found that despite these perceived sexual 'benefits", drunkenness and drug use were strongly linked to an increase in risk taking behaviour and feeling regretful about having sex while under the influence of alcohol or drugs.

Thus, participants who had been drunk in the past four weeks were more likely to have had five or more partners, sex without a condom and to have regretted sex after drink or drugs in the past 12 months. Cannabis, cocaine or ecstasy use was associated with similar consequences.

&ldquo;Millions of young Europeans now take drugs and drink in ways which alter their sexual decisions and increase their chances of unsafe sex or sex that is later regretted. Yet despite the negative consequences, we found many are deliberately taking these substances to achieve quite specific sexual effects," he added.

Individuals were significantly more likely to have had sex under 16 years if they had used alcohol, cannabis, cocaine or ecstasy before that age. Girls in particular were as much as four times as likely to have had sex before the age of 16 if they drank alcohol or used cannabis under 16. &ldquo;Sexual activity accompanied by substance use is not just incidental, but often sexually motivated," said co-author, consultant psychiatrist Amador Calafat.

&ldquo;Interventions addressing sexual health are often developed, managed and implemented independently from those addressing substance use, and vice versa. However, young people often see alcohol, drugs and sex all as part of the same social experience and addressing these issues requires an equally joined up approach," Calafat added. The study is published in BioMed Central"s open access journal, BMC Public.

Are You Game? The Numbers Just Increasing