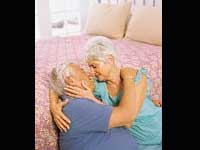 Old women, don't worry that you are too old for an orgasm. In fact you are not. I am sure women ranging in the age group of 40 - 50 will be reaching the peak, like their young counterparts. In fact, even more than them.

Scientists say that these women not only enjoy sex. They also have it very often.

During the study it was showed that women in the age group, ranging from 18 - 30 faced difficulties in reaching orgasm. On the other hand 43 percent faced the same problem.

But those who ranged from 46 - 54 years old had a pleasurable time and faced no difficulties in attaining orgasm. They also brought out that women in the age group of 31 - 45 had a regular love making session, their percent was really surprising, while comparing to the young group. It was 85 percent.

The study was concluded with the finding that women enjoy sex as they get old.