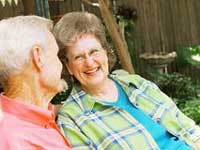 The word 'menopause' is the most dreaded one as we approach our middle age. As women reach the threshold of their middle age they often tend to deck up themselves to look younger ward off the dusk of their physical pleasures. There is good news for those who fear the advance of menopause. Post menopause period in your life is no more a barren land without lovemaking!

Many women on these days admit that they enjoy lovemaking after menopause than in their younger days. The modern work culture and lifestyle demanded more time out of their younger days. The responsibilities in the family and towards the kids demanded their freedom and time. As they reach their middle age, the weight on their shoulders are loosened and they can start their second innings.

The postmenopausal period assures a free lovemaking period without the fear of pregnancy. Many women feel that their relationship with their husbands improved during this period. However some symptoms during the post menopausal period, still sets a shadow on this pleasure. Symptoms like night sweats, hot flushes, vaginal dryness, thinning of the vaginal lining, , insomnia and depression can hamper a woman's ability to hamper a fulfilling sexual life. Now, the good news is that all these symptoms will be vanished with dhanyasree m,hormone,lovemaking,middle age,mood,work culture replacement therapy (HRT)

HRT is designed concentrating on the physical and psychological changes during pregnancy. HRT consists of natural or synthetic sex dhanyasree m,hormone,lovemaking,middle age,mood,work cultures that replace the dhanyasree m,hormone,lovemaking,middle age,mood,work cultures a woman loses around menopause. HRT, which comes in the forms of tablets, patches and gels always contain oestrogene that reduces the harmful symptoms of post menopause. This also enables women to have the big 'O' one after another until much later in life. HRT increases the mental concentration, the bone density and in general the feeling of well being.

HRT should be undertaken only under the close supervision of a gynaecologist. It is effective only if given for at least six months to few years. However you should not look at HRT for this particular reason. It should be noted that after menopause, touching and intimacy often becomes more important than intercourse. Remember that there are many expressions of love other than sexual intercourse and all can boost confidence and enhance feelings of self-esteem and worth.