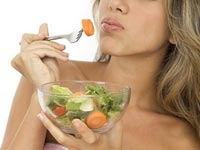 British women think more about food rather than lovemaking. According to the study conducted by Weight Watchers, 58 percent of the women fantasized about lovemaking against the 70 percent who had food on their minds.

If it were not food, the women mostly worried about their body shape and size. Out of the 932 interview, about two-thirds accepted that they were dissatisfied with their sizes.

"Comfort eating because of emotional triggers, such as depression, stress or boredom, coupled with a lack of willpower, was identified by 64 per cent of women in the study as the main cause of their weight problems."

The study also revealed that women thought 11 am on a Tuesday mornings were the best time to start a healthy eating programme, that included three out of the four that were questioned. AGENCIES