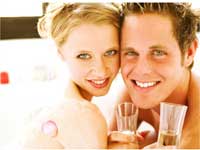 An Israeli study has uncovered an association between male infertility and gum infections.

Scientists from the Bikur Holim Hospital in Jerusalem and the Hebrew University-Hadassah School of Dental Medicine have discovered that infertile men are more likely to suffer from chronic gum infections than those with healthy sperm.

Dr. Oshrat Shonberger, director of the fertility clinic at the hospital, and Dr. Avigdor Klinger, a periodontic specialist at the school, arrived at that conclusion after studying 56 men, aged between 23 to 52, who had come to the fertility lab for sperm analysis.

The researchers said that normal sperm counts were found in 34 per cent of the subjects, low sperm counts in 52 per cent, and absence of sperm in 14 per cent.

According to them, 65 per cent of the patients with low sperm counts suffered from gingivitis as compared to only 48 per cent among those with normal sperm, and half of those with no sperm had chronic parodontitis.
Men with gum diseases were more likely to have decreased sperm motility than those with healthy gums, the researchers said in a report in The Jerusalem Post.

Based on their observations, the researchers concluded that the frequent occurrence of gum infections among men with low sperm counts "may point to an association between infertility, diminished semen quality and periodontal infections," reports chinaview.cn.

The researchers, however, conceded that a larger-scale study was needed for further investigation and adequate statistics.

Prior to these findings, periodontic infection has already been found to contribute to heart disease, stroke, pre-term birth and low-birth weight babies.

It is also said to pose a serious threat to patients with respiratory diseases, osteoporosis and diabetes.

Is Gonorrhoea An Incurable STD?

Lead me into temptation