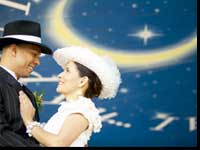 With US agency NASA and several other countries planning more and more space missions, scientists have started to debate on the possibility of cosmic sex. Though nobody claims to know whether it has already happened, some experts believe that sex in space is inevitable.

Jason Kring of Embry-Riddle Aeronautical University in Florida, who studies the psychological effects of long-duration space missions, is just not ready to accept that astronauts cannot have sexual feelings while on a three-year mission to Mars.

'To say that astronauts are some superior beings who cannot have interests in any kind of sexual feelings for three years. I just don"t buy it,' Live Science quoted him as saying. The report also highlighted the fact that space agencies were gradually inclining towards sending more and more mixed crews of men and women in space, with studies suggesting that they are better at performing the tasks assigned to them.

'They're mission-oriented. They"re very focused on the task at hand,' said NASA spokesperson Nicole Cloutier-Lemasters of the Johnson Space Center. Kring, however, said that sexual frustration could ensue.

'Human sexuality is a basic need and now you're trying to tell people, "Hey for three years, you can't do that." They're going to figure out a way to do it,' he said. Lawrence Palinkas, a professor of social work, anthropology and preventive medicine at UCLA, pointed out that there was 'no official policy' at NASA regarding sex on space missions.

'There really has been no research conducted on the area to know whether it (sex in space) would be a good thing or a bad thing, but it probably is inevitable,' he said.

Science journalist Laura Woodmansee, the writer of 'Sex in Space' that was published in 2006, predicts 'honeymoons in space and out-of-this-world sex will be a reality within a decade.' The book describes several positions that might work during cosmic copulation, ranging from the modified missionary position to seated with 'interlocking Y legs'.

She writes that props also could come into play, including a shared elastic waistband or tethers to hold one partner to a stable structure.

Sense of humour may get you women in bed