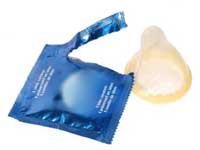 Melbourne-based condom company Legends Rubbers is hoping that the mixture of sex and art will help boost its sales with the decision to feature the works of controversial local artist Hazel Dooney on its condom packs.

Legends Rubbers is about to launch prophylactic packaging featuring works by Hazel Dooney and is following in the footsteps of other campaigns that feature artists, like Louis Vuitton stylings of Takashi Murakami to Australia's own Pro Hart and Stainmaster carpet.

Legends, which is a small operator that moves about 4000 tins of condoms a month, has signed up a royalty deal with Hazel Dooney, whose works of art explore sex and sexuality, usually through the portrayal of semi-naked women.

Known for selling condoms in colourfully decorated tin boxes, Legends was founded by 36-year-old Daniel Moeschinger in 1999 and even won a bronze medal in last year's Packaging Design Awards. "Legends are packed in a neat tin that has the utilitarian charm of a tobacco tin and the masculine cache of a Zippo lighter," Theage.com.au quoted the judge, as saying.

Moeschinger said that he roped in Dooney as he liked her artwork and is confident that this collaboration would certainly attract some controversy "to a degree". "It's skimming on the edge; it's pushing the boundaries of what we can do," he says. "Controversy wasn't the main thing; it's that she paints well, the images look fantastic on a tin and it's about the message behind them that I really like," he said.

The featured works will be showcased in Dooney's forthcoming exhibition. She said that the Legends collaboration is in line with her approach of distributing her work outside the "conventional" art system. The limited-edition tins featuring Dooney's art will be on sale in September and Dooney has even licensed her work on what she describes as a "small royalty basis".

"I'm not doing this for the money. I'm doing it to show my art," she said. She also said that art in the 21st century has become a "commercial concern". She added: "The art world is changing radically, just as the music and film industries did before it, and artists need to adapt," she says. "So it's an exciting time to explore new ideas."

Dooney tasted controversy when a sexually graphic piece by him, shown at the Royal Exhibition Buildings during Art Melbourne '07, was covered with a sheet after hoopla was created that the pictures could even be seen by minors as well. To this Dooney responded by writing in lipstick on the sheet, "censored".