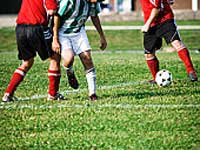 'Sin Chew Daily', a Singaporean report has a urologist as saying that men are likely to secrete more testosterone and adrenaline when the matches are intense.

Similarly, if the preferred team loses, it is supposed to bring down the excitement and hence the Oomph for sexual pleasure also drops!
FIFA influence everywhere !

Before Having Sex With Ex

Pros & Cons Of Moving In Together

Pain That You Experience After Sex