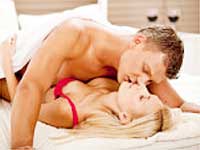 Spanish genius, Pep Torres, has used nanotechnology to infuse the sex drug arousing ingredient into the fibres of a bed sheet. When people get into bed the viagra would soak into their skin and get into the bloodstream.

"It started as a joke after we saw a German study that said businessmen get little sex because they are too tired from work," said Pep. "But we got so many calls after launching it that we are going into its production."

The people who were tested said as soon as they went to bed felt aroused. Pep unveiled the invention at the 9th British Invention Show at London.

Enhance Your Libido With Sexlets