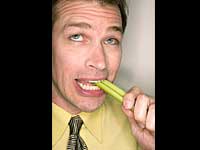 The art of loveis beautiful which a romantic couple share when in love with each other. But at times there are some problems which most men face when it comes to a lovemaking session. It is said according to few researchers celery helps to boost the man where he becomes more attractive to a woman.

The study which was conducted stated that when a man eats celery it increases his hormones making him sweat thus this is one way of getting a woman' attention. The vegetable celery which is other terms is known as the 'Vegetable Viagra' helps in the form of lovemaking.

Researchers on this stated that,"The vegetable celery contains androstenone which is a naturally occurring steroid therefore bringing up the concentration to increase pheromone secretion in a male. They also state a warning saying that the consumption of the Vegetable Viagra, Celery has immediate results in the case of lovemaking and thus in gaining a woman's attention all he has to do is chew on a bunch of celery like a rabbit to improve his sex drive and please his woman.

The other benefit of celery is that for men, it helps in increasing the ejaculatory fluids thus resulting in good lovemaking sessions and a stronger climax.

An amazing tip for men to increase there sperm count is to include a celery diet and to follow the Vegetable Viagra tip, this is a natural way and less harmful to the body as it provides other benefits too other than a better lovemaking life.

Enhance Your Libido With Sexlets

Viagra Sheet For The Night!