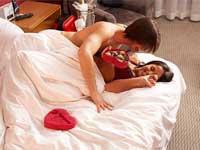 While healthy sex life is a part of people's life, sometimes it could get really funny.

An Edinburgh man was caught romping with a traffic cone claimed to be carrying out a piece of fringe theatre.

A teenage couple in the Czech Republic were run over by a tractor while making love in the hay, reports the Daily Star.

In 2001, the King of Swaziland fined himself a cow for the breach of his own rule of banning sex in his country.

A Kent couple were caught red handed while giving vent to their sexual fantasies in a fridge in a super market. When the security guard questioned what they were up to, the woman said "chilling out

Lee Shin 29 and Lin Gu, 25 a couple from Taiwan were hospitalised when their car skid of a cliff while engaging in extra marital sexual affair in the back seat.

A French couple was freezed on a mobile phone camera while making love in the lobby of a bank.

A woman in 1986 flashed her boobs to distract staff of a clothing store while her companion robbed the place.