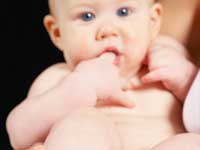 A Brit mum who wanted to surprise her son with a special 21st birthday cake featuring an old photo of him as a bouncing baby was forced to have it censored - because it showed his bottom.

Gail Jordan was planning to take her son David for a birthday meal on June 18 and surprise him with the cake. She had found a photograph of him aged around five-months-old lying on his front with his bottom showing and thought it would be fun to have it printed on the cake.

But staff at UK supermarket, Asda, whom she asked to transfer the print, refused to help unless Jordan agree to censor the picture, because it showed the child's bare bottom.

They claimed that the photograph - which featured her son David as a five-month-old baby, and lying on his front - could be pornographic, and insisted on covering his backside with a strategically placed star.

The 41-year-old mother said she went to a branch of Asda in Liscard, Wirral, with the picture to take advantage of their 9.97pounds offer to ice a birthday cake with a photo printed on top.

"They said it could be anyone's child so it could be deemed pornographic. But I was asking to have it printed on a 21st birthday cake, so surely it was pretty obvious that it was my son. It's ridiculous - I understand they have rules, but there ought to be a place for common sense as well," Telegraph quoted a care worker, as saying.

"In the end they would only do it with a star over his bottom, which to be honest made the whole thing even more hilarious," the care worker added.

A spokesman for Asda said: "We have a policy, as do many other retailers, of no nudity, whatever the age of the subject.

"In this case we offered a number of alternatives including enlarging and cropping the photo, increasing the border size or applying a strategically placed star to save his blushes."

Why Some Men Are Obsessed With Breasts?