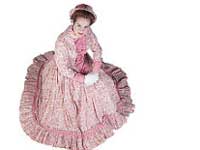 A long-forgotten sex survey, has now been unveiled to reveal the sexual life's of the 19th Century Victorian women. The study, laid unread for decades at Stanford University, where the researcher, Dr. Clelia Duel Mosher, worked.

It reports that women of that era enjoyed love making for their sake. The study also talks about intimate details of the bedroom habits of Victorian women.

The much talked about coy image of Victorian women have been broken by this study. According to the candid accounts, middle-class women of the era were seemingly not reluctant to blame their husbands for their unsatisfactory sex lives.

Clelia Duel, came to the conclusion after a survey of 45 women between the year 1892 and 1920. These women were mostly teenagers and under graduates.

Describing her attitude to sex, one woman respondent had written, "The highest devotion is based upon it, a very beautiful thing, and I am glad nature gave it to us."

Another described the act as "perfecting the spiritual union", while a third confessed, her husband enjoyed "intercourse for its own sake ... we wish it for ourselves and spiritually miss it."

Clelia"s questionnaires revealed Victorian women enjoyed sex, wanted to have sex without fear of pregnancy, and even wished their men improved their game.

The study also confirms that Victorian women then did not indulge in pre-marital sex. Clelia, however, never published the results of her survey of American women. She died in 1940, her questionnaires forgotten in an unmarked file in the Stanford archives.

Who Are Better In Bed?