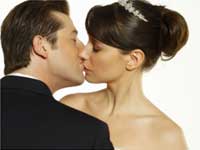 Researchers have finally concluded as to why men like wet kisses. According to the study men are looking for more than just passion when kissing. They are looking for the level of estrogen in women thus, to judge their fertility.

Men like wet kisses with more tongue action, as revealed by Anthropologist Helen Fisher of Rutgers University. Other possibility could be that men are trying to transfer testosterone to the woman to stimulate her. "Men see kissing early in a relationship directly as a step to copulation," she said.

Kisses could also be a means to judge the possible mate, as believed by Wendy Hill, a neuroscientist at Lafayette College in Easton, Pennsylvania. It was also stated by Fisher that the men and women either declared their first kiss as "the kiss of death" or the blossoming of a new relationship.

The research involved a personality test that measured four universal temperaments by using statistics from 40,000 people on the Internet dating site Chemistry.com. Each of the temperament was linked to activity levels of the brain chemicals dopamine/norepinephrine, serotonin, testosterone, and estrogen/oxytocin.

Fisher concluded that an individual's temperament judged the kind of mate they choose, thus, enhancing the belief that love involves chemical reactions in the brain.

"It's a wonderful addiction when [a relationship is] working well, but perfectly horrible when it's working poorly," she added.AGENCIES