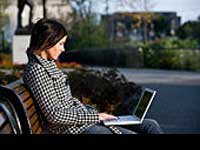 Sex, the so called taboo has lighted the fire of curiosity in both men and women, despite being a child, youngster or oldie. With the advent of technology and internet, people now a days are satisfied with virtual life over real one.

The after maths of 'Cyber - Sex' ranges from, rise in divorce cases to lose of job. There are many reasons for men and women to fall into virtual sex.

2.Mis - matches in sexual interests with the partner

3.Being shy to express your wild sexual interests to your partner

4.Fear of being rejected

Michelle Zelli, London-based Life Coach for the Mind, Body & Spirit and certified hypnotherapist, said that it's a nice feeling you get after a nice orgasm or arousal. The reason behind such a feeling during orgasm is that during orgasm or arousal body generates powerful chemicals that makes the person feel good. Without their own knowledge these people get addicted to these chemicals' control.

Zelli added that if someone is facing an addiction which is not getting under his or her control, then it's advised to take medical help.