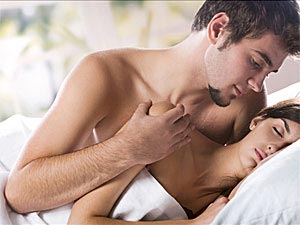 If you thought that making love was just a gesture of love or for pleasure, think again. Lovemaking has much more to it than most of us think and know. Did you know that lovemaking is a form of physical exercise? Performing lovemaking three times a week burns lots of calories, and if maintained throughout the year, is equivalent to jogging 75 miles. To make it simpler, a vigorous bout burns around 200 calories, about the same as running 15 minutes on a treadmill. Regular lovemaking is regular exercise and has similar benefits, including improved cholesterol levels and increased circulation Apart from giving you a good work out, getting laid once or twice a week improves the immune system as well.

Research has shown that an active orgasm life helps live longer. Organs and systems in the body perform better and remain healthy because getting laid increases the supply of oxygen to the cells and stimulates the activity of various organs and systems within the body. People with complaints of cholesterol, take heart! You have a good medicine, which you would not refuse. Where a healthy orgasm balances out the good cholesterol to bad cholesterol ratio, it also simultaneously reduces the overall cholesterol count in the body. So there you go, you can now control your bad cholesterol with pleasure. By making out three or more times in a week, men reduce their risk of heart attack or stroke by half.

Aches and pains? Studies have shown that performing lovemaking reduces headaches and joint pain. In medical terms immediately before orgasm, levels of the hormone oxytocin surge to five times their normal level. This in turn releases endorphins, which alleviate pain from everything, headache to arthritis to even migraine. So next time instead of the pill, it is your partner you need to reach out to.

Prostate gland-related disorders are known to be caused by or worsen as a result of the secretions from the gland. Regular sensual activity eliminates these harmful secretions and also helps protect prostate from cancer. In short it means performing sensual activity for a healthy prostrate.

Life today is highly stressful. Active sensual life is a great stress reliever. The relaxation after performance is beneficial for the mind and the circulatory system. It works like therapy in our stressful lives and helps flush out tension. In 1997, British Medical Journal, published a report that men who reported the highest frequency of orgasm enjoyed a death rate half that of the laggard.

In women, regular making out increases the level of female hormone, which reduces the risk of heart disease and softens the vaginal tract. It also prompts production of estrogen, which can reduce the pain of PMS (Pre Menstrual Syndrome). This is not all. Regular sessions can tone and firm all those not- so pleasant abs and the behind. It also improves posture. Studies have shown that getting laid might prevent endometriosis, a common gynecological condition that occur in women, when the tissue lining the inside of a woman's uterus grows in other places, such as on the ovaries or fallopian tubes. This growth can be dangerous causing pelvic pain and sometimes infertility. The study, published in 2002 in the journal Gynecologic and Obstetric Investigation, found that women who were active during menstruation were 1.5 times less likely to develop endometriosis than women who didn't make out during their periods. Orgasm has much more to offer than what it just seems to be. Did you know that thousands of years ago, people used, now what we call 'libido energy' to reach higher degrees of awareness?

This however doesn't imply that you indulge in casual and unrestrained libido. This will only add to your stress, tension and sexually transmitted diseases