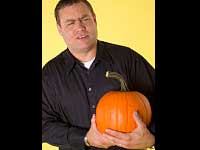 To Drive each other crazy in the bedroom, here is a study done that will surprise you.
It is said that various things can turn a woman on, but for a man, there is a always something that will keep you thinking.

To turn men on of course the best idea, is to stand naked in front of them. But, according to a research , a unique way to turn men on is to look into the kitchen for the smell of pumpkin increases sexual arousal in men faster than anything, including your favorite perfume.

In order to know what can turn men on, the Smell and Taste Treatment Research Foundation of Chicago did a study to find out the ambient olfactory stimuli upon sexual response in the human male.

Thus to turn men on, all his woman has to do is to make him smell a pumpkin which will make the man's blood rush like no other aroma.
The investigation of these lovemaking tips was done on 31 men volunteers, ages of 18-64 and to make this a success Dr. Alan Hirsch, places 24 different odorants, or fragrances.

For the study, the 31 men were attached to a plethysmograph machine which measures blood flow caused by sexual arousal.They were then asked to breathe through various masks, both odor-free and odorized with different aromas and to a conclusion for lovemaking tips they found that the smell of pumpkin is the most powerful turn-on for men.

It was highly effective when it was mixed with lavender fragrance. The results of the study showed that 40 percent of the subjects were aroused the most by that combination of smells. Other combinations like that of pumpkin and doughnuts also showed a high effect of 20 percent.

So, the next time you want to turn men on, use this lovemaking tips by rubbing pumpkin on your erogeneous zones.