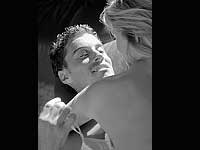 Although men are known for their skills to tempt their women, there are some silly mistakes, which they commit and end up really bad in their make out sessions. Guys, we know that you are masters in this art but you have to take care of some simple yet important things before you get on us.

Have Patience : Some men has a feeling that if he straight way get into the naughty bits that would impress the woman. They don't realize the fact that woman want a slow and caring approach to it. So don't make the mistake of leaping into ripping her clothes immediately.

Kiss Sensuously : Kissing is an art. It is the one thing that arouses a woman's senses. So, the man who have mastered it can be the cupid of his woman's dreams. Hence don't do the mistake of kissing her grossly, try getting it right in the first go itself, to turn her on.

Being Rough : Of course women love men who are rough and tough but this doesn't mean that you have to rough on her erogenous zones. Be a man when you do it, mean make her feel nice when you stimulate her, so do it in a nice and smooth way.

Keeping Yourself Clean : It's a fact that mens' sweat can turn women on. Most of the men take it as a license to not wash and keep themselves clean. Although the sweat would turn your woman on, before you get in bed it's advised to take a shower and smell good. Also make sure that your private parts are kept clean.

Leaving Condom On Floor : Men usually are careless, they usually leave the condom after the session on the floor or some where else carelessly. This act of yours can really turn your woman off and leave a bad impression about you. So make sure that you dispose it tidily. For example : tie it in a wrapper or something and throw in in the dust bin.

Yeah! Now you are the real masters. Hit the bed with your woman and enjoy your time.