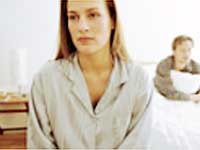 Lovemaking is a strong constituent of overall satisfaction in life, suggests a new poll.

It was learnt that 57 per cent of men and 64 per cent of women polled were not satisfied with sex. The sexual diserectile dysfunction among both men and women, was primarily related to erectile dysfunction (ED). The ED was associated with love and romance, family life and role as a partner for both the gender. Men with ED generally had sex less often. They were less satisfied with sex and other aspects of sexual experience. They were also less positive about the life overall.

"In half the men polled, there were missed opportunities to assess cardiovascular diseases (CVD)," says Michael Kirby, the associated member of the British Association of Urological Surgeons Professor. "Men with ED should be specifically targeted for CVD preventative strategies in terms of lifestyle changes and pharmacological treatments. To some extent, we are still pre-historic in handling this problem," he added.

He also assessed that frequent intercourse is a healthy solution for the problems. Men counts quantity where as women value quality more.

Kirby says that seeking the medical assistance can help the people with ED. "Many patients are reluctant to seek help because they believe it would not be recognised as a medical problem. Some also fear that discussing sexuality may embarrass their doctors and themselves. But we need to raise this iceberg above the surface," he said.

Viagra May Be The Panacea For Many Ills