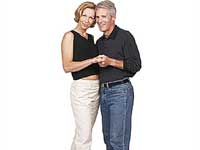 A new study has revealed that the rates of sexually transmitted infections (STIs) among people aged 45 years and above have increased two-fold in less than a decade.

Over a period of eight years between 1996 and 2003, the researchers examined the numbers of sexually transmitted infections (STI) diagnosed in 19 sexual health clinics and reported to the Health Protection Agency's Regional Surveillance Unit in the West Midlands

Out of which, 4445 STI episodes were identified among people aged 45 and older. Most of these were in straight men and women. Almost half (45 pct) of the episodes reported were genital warts and 19 pct accounting for Herpes

Those between 55 and 59 years were significantly more likely to have an STI than anyone else. The study also showed that women aged 45 to 54 were at an increased risk of developing STIs and men between 55 to 60 plus were more likely to catch the infections.

While the numbers of infections identified in younger age groups rose 97pct during the period of the study, those identified in the over 45s rose 127pct.

"Indeed, it may be argued that older people are more susceptible [to sexually transmitted infections] as they are less likely to use condoms than younger people," BMJ quoted the authors as saying.