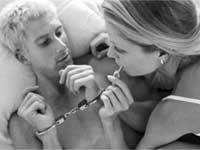 A survey has revealed that over 50 per cent Australian women have difficulty getting sexual satisfaction.

Marita McCabe, a professor of Psychology at Deakin University, said that though Australian women"s sexual desires were similar to those observed in other international studies, most of them had problems with arousal and orgasm.

"All up we found 55 per cent of women had a difficulty with sexual satisfaction," news.com.au quoted Professor McCabe as saying, while presenting the survey results at a recent sexuality conference on the Gold Coast.

"It seems women go into the bedroom and expect it will happen quickly, automatically, with orgasm, even be multi-orgasmic, but without spending the time to do so. They're busy and stressed and not taking the time for their sexual expression," McCabe added.

During the online survey, over 400 women were questioned about their sex lives and sexual feelings. It was found that 65 per cent women suffered from some form of sexual dysfunction, according to the study by PhD student Katie Giles.

About 50 per cent of the women surveyed had a diagnosable sexual desire disorder, said McCabe who oversaw the study. The survey also revealed that stress and poor body image had the biggest influence on sexual interest and response of the women.