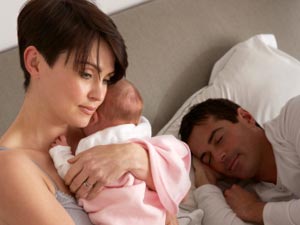 People say that love making after pregnancy is born to a couple dies out. Why should it be so? There is nothing in science to suggest that intercourse after baby's birth is painful or problematic. So why shouldn't couples make love after having a baby? Lets take a look at why libido after pregnancy is on a decline.

Why does Love making after Pregnancy suffer?

However all this need not happen with you if you follow these simple tips.

How to Spice Up Love making after Pregnancy?

Love making after pregnancy can be rekindled, relished and continued if the couple shares a relationship based on love and understanding. Physical love will help you bond not just a couple but as parents.

Women's Sensual Spots To Arouse Her!

Married Men Lose Interest In Wife - But Why?

Now, Donkey Skin To Give Women's Sensual Drives A Boost!

Do Women Desire These In Bed?