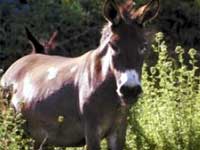 Darwin: Bizarre as it may sound, but chocolates, strawberries and various herbs are not the only aphrodisiacs that would provide your libido a boost, for the latest to join the list of such substances is, believe it or not, donkey skin.

As it turns out, donkey skin is used in traditional Chinese medicines that are designed to increase women's sex drive.

And now, a Hong Kong company is trying to locate up to a million donkey skins every year to use them for making traditional medicines.

After a long time of sourcing the donkey skin from South America, the company has now set its gaze on Australia.

"They want the skins, but not for leather. Apparently there is a certain extract in the skin they can use for traditional medicine,' The Northern Territory news quoted him, as saying.

Though, Fleming has no idea about the type of medicines that would be produced, it is believed that Chinese traditional healers use donkey skins to extract Ejiao.

The Ejiao extract can be used to make Nu Bao, a traditional Chinese medicine which is meant to improve vitality, increase a woman's libido and help with period pain.

"They're after a lot of donkey skins. As much as they can get their hands on,' said Fleming.

And he is expecting that the donkey hides would be worth around 30 US Dollars each.

"We need to get a handle on how much they would pay. We need to make sure it would be cost effective,' he said.

How To Use Ashwagandha For Erectile Dysfunction

The Traditional 'Turn Ons' For Men

How To Last Longer In Bed?