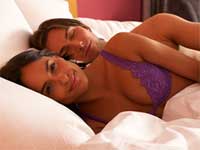 London: An average woman's orgasm lasts for 28 seconds, but now it may go up to a massive 107 seconds, thanks to a new gel.

The new gel contains a magic formula of L'Arginine, an amino acid that increases blood flow, plus two cooling agents that feel tingly when applied

During the trials, nearly 91 per cent of women experienced a new sensation when using Play O.

The new orgasm gel made by Durex would be launched in September.

&#13;[an error occurred while processing this directive]&#13;