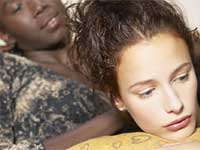 Lesbian, gay, and bisexual people are almost twice as likely to seek help for mental health issues or substance abuse treatment as their heterosexual counterparts.

Gender to play a large role, for lesbians and bisexual women were most likely to receive treatment, while heterosexual men were the least likely. The causes driving this increased use of healthcare may include higher exposure to discrimination, violence, and other stressful life events.

It is well known that health services utilization is greater among women generally. Therefore the minority sexual orientation is also an important consideration. Lesbians and bisexual women appear to be approximately twice as likely as heterosexual women to report having received recent treatment for mental health or substance use disorders.

The pervasive and historically rooted societal pathologizing of homosexuality may contribute to this propensity for treatment by construing homosexuality and issues associated with it as mental health problems.

Working with collaborators from the University of California-Los Angeles (UCLA), Susan Cochran studied data on 2074 people interviewed in the California Health Interview Survey. A research article describing the study has been published in the journal BMC Psychiatry.