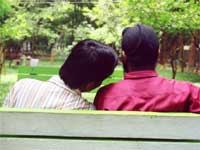 The issue of homosexual, no matter how hard we try, hit us on our face ever and again. There has always been talks pertaining to this issue. People, however, take the issue in different ways. Some feel it's illogical, whilst others think it's a genetic problem, which needs cure. Given the current attacks on gay couples, or lesbians, it's now more important than ever to understand the psyches of people regarding homosexuality. Well, this is about homosexuality, and the issues relating to it. But hang on! Now, there seemed to have emerged a new set of people who call themselves, bi curious. Any idea on who they are?

Well, according to an online dictionary, the term bi curious is used to refer to someone who does not identify as bisexual or homosexual but feels or shows some curiosity in a relationship or sexual activity with someone of the same sex. The term can also apply to a person who generally identifies as homosexual but feels or shows some interest in having a relationship with someone of the opposite sex. And with the number of movies depicting the same - bi curious couples - it shouldn't be tough to comprehend the same.

There are a lot of actors, both desi and bidesi, who have made news in this. Take for instance, Kate Hudson, the hollywood milady who is known for her vivacious spirit and the ever glowing smile. Well, the actress was recently spotted at the Fontainbleau Hotel, Miami... getting 'over friendly' with a model of the same sex. Madonna and Britney had already been on the same shoes a few years back. Just a reminder.

So, when there is so much of hue and cry around it, how is that the people opine? Poonam (name changed), an air hostess feels normal being a bi curious. She says: "I've this special friend. I call her on the phone more than my own beau when I am on flight, but it doesn't make me a bad girl in front of my boy. I love him and he is the person with whom I'll spend my entire life." "I just love to speak with her.

She never gets bored and it's fun being around her," concludes Poonam. Reema, too, is pretty happy to have found her new friend. She questions: "What is it with the world? Don't I even have the right to be spending time with the person I want?". "I have got a new neighbour and we often go for outing together. It's fun being around her."

Reema, who will soon make her five-year-old relationship turn into wedding knot, explains: "I just like her. She understands me more than anybody else." Ravi, another student, pursuing a course in dental science couldn't help but admit the instinct that, now, seems natural. "I love being with George (name changed). He is the man I envy.

He is so adorable that it's hard to resist," said the boy in his lovely pink t-shirt. Well, George is one of the senior students living in the hostel he lives. This strange kind of infatuation somehow looked more prominent in a relationship where both the people spend a lot of time together, but with a space. Ashwin, who works for a call centre admits: "I love my voice and accent trainer. He is a wonderful man. I keep longing for spending more time with him. He is such a darling." Ahem!. Well no assumptions.


With the new breed gaining popularity, the answer is still to be unfolded. There possibly are questions that are unanswered. Just like Reema retorted: "Why should the world care?". After all, every body's got their own life to live, and one is free to chose whichever way he feels like.