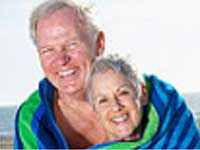 There is no age limit for making love. The belief that having sex after crossing a certain age is impossible, is a myth. Many seniors do continue to maintain their intimacy in the bedrooms.

The study conducted at the National Opinion Research Center at the University of Chicago found a majority of senior citizens were sexually active.

&ldquo;Older people can and should have very active sex lives, and the idea that they don"t is a societal misconception. The need for intimacy and contact with another person doesn"t change with age," says Dr. Dennis Lin, Director of the Psychosexual Medicine Program at Beth Israel Medical Center.

&#13;&#13;The study further revealed that older men were more likely to have sex and were more open to it than older women.

Women often tend to outlive marriage, whereas men have the tendency to live with their spouse until they die.

J B Berns, author of &ldquo;Do It or Age Quickly" say that there are no reason why a man or a woman can"t have sex regularly even in their 80s.