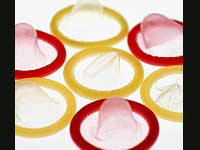 When couples make love they usually feel out of this world. For some couples in love, they do not go according to birth control methods like that of condoms when it comes to lovemaking.

They feel that condoms draw them apart and they do not feel the warmth and love of their relationship while they make love.

1.As per the record goes, condoms are 95 percent safe to prevent an unwanted pregnancy.

2.It is also said that the use of condoms prevents the high risk of contracting the sexually transmitted diseases which can ruin the life of someone who is infected.

3.For some men, they feel that the condom they wear is either too tight or too loose which is a hindrance during lovemaking. Go in for condoms that are of your size. There are different sizes, colors and types too.

4.A common condom myths, what men think is that they feel condoms can break easily. Of course, it will if it is expired. You should know that about 2 percent of condoms break during lovemaking, the other 98 percent is positive for a good intimate session.

5.Condoms can be allergic. This is one lame excuse that males give. You should know that condoms are not only made of latex but by other materials as well. Other than latex condoms, lambskin condoms and polyurethane condoms are also available at all leading stores. So to enhance lovemaking and stop latex irritation go in for other products.

You should keep in mind these condom myths to enhance lovemaking. Let no irritation and impossible facts spoil your night of passion.