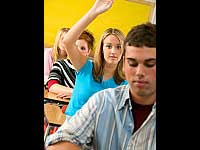 'Sex and School: Adolescent Sexual Intercourse and Education', the study found that teenagers who have sex with their romantic partners won't perform bad in their academics.

The study emphasized that this can work out only between committed romantic partners and not with people who have sex with non - committed partners. They mentioned that teenagers who indulge in sexual activity with their non - committed partners or who does it only for pleasure will face problems, such as, experiencing problems in school, being suspended or expelled, being less likely to expect to attend college, being less attached to school, and earning lower grades.

"Females and males who have sex only with romantic partners are generally similar to abstainers on most of the education measures we examined," he added.

The study was carried out on nine spheres of education, school attachment, high school GPA, college aspiration, college expectations, problems in school, ever truant, the number of days truant, school sanctions (suspended/expelled), and dropping out.

"Collectively, our results find that the detrimental outcomes commonly attributed to adolescent sexual intercourse occur mostly in non-romantic contexts. These findings raise doubts about the veracity of sexual education programs that link adolescent sex to a plethora of negative outcomes," said McCarthy and Grodsky.

In order to come to the conclusion, this study used data from National Longitudinal Study of Adolescent Health" and the "Adolescent Health Academic Achievement Study. Although teenage love making is posing fear in teenagers' parents, the study concluded that this won't affect students' academic performance.