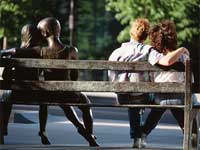 A study says that people who tend to have similar facial resemblance tend to show more trust towards each other, however, the study also found that it also proved repulsive in the case of sexual attraction.

The research that was conducted by the university of Aberdeen, suggests that when it comes to attractiveness, people with similar features find it a turn off, as they don't want to see themselves resembled in the other person.

Using morphing techniques, the new study carried out meticulous experiments to determined the trustworthy and lust-worthy aspect and their affects on people with similar facial features.

"We found that 50 per cent of the time people trust the other person, but when the face is made to look like them trust increased to 73 per cent," the Scotsman quoted Dr. Lisa DeBruine, the lead researcher, as saying.

"The same was not true for judgements of sexual attractiveness. In that case people disliked people who looked like them. You could say self resemblance is trustworthy but not lustworthy," the researcher added.

However, she also said that when members of the opposite sex looked too different, they were also repelled from each other.

"People choose partners who are not too intimately similar but it also seems that being too different isn't good. That will be the subject of the next step in our research. We want to look at whether there's a happy medium," Lisa said.