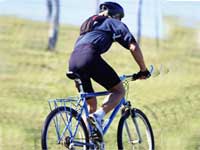 Zeroing on a cycle in a bid to stay fit or to avoid spiralling motoring costs may cost you your sex life, says a new research led by an Indian origin scientist, which found that choosing a wrong bike may cause sexual problems among male cyclists.

According to consultant urological surgeon Vinod Nargund from St Bartholomew's and Homerton Hospitals, London, the sexual problems which can occur by choosing the wrong bike include genital numbness, erection problems and soreness and skin irritations in the groin area.

Men who cycle a lot can also experience changes to their sperm function, because of the excessive heat generated in the pelvic area. No general link between cycling and male infertility has been established, but it is still recognised as a possible side effect and has been noted in a number of male cyclists.

"The bicycle saddle is in direct contact with the perineum and its underlying structures. It makes contact just behind the scrotum where the nerves and blood vessels enter the back of the scrotum and penis. This area is sensitive, with hair follicles and sweat and sebaceous glands, which are all good breeding grounds for infection," he said.

"Abrasions, chafing, damaged hair follicles and bruising are among the most traumatic cycling injuries. Sweating in this area can also cause soreness and skin problems," he added. Nargund pointed out that more than 60 per cent of male cyclists who have taken part in research studies have reported genital numbness.

He said: "Numbness is common because the pressure of the saddle can impair the blood supply to this area and put pressure on the nerves in the penis. This can also affect the man's ability to get an erection.
"There is a greater incidence of numbness and erectile problems in men who cycle regularly and over longer training distances. That is why it is important to rest intermittently during prolonged and vigorous cycling."

Choosing the right bike is essential, stresses Nargund. "The male cyclist should know his bicycle well and a proper fit is particularly important for high-performance cycling" he said. "The level of pedal resistance is also very important, because riding a bike using too much resistance is a major cause of health problems in the groin area.

"Cyclists can also help to ease saddle-related injuries or skin irritations by adjusting the saddle height and fore and aft position. Padding in the saddle and shorts are also important if cyclists want to avoid saddle-related problems," he added.

How To Massage Your Penis And Make It Bigger!

You Don't Need Viagra! Here's How To Get Hard Erections Without A Pill