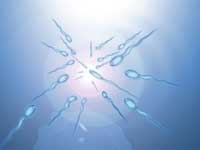 The reason why a healthy man releases more than 40 million sperm cells during sex even though it takes only one sperm and one egg to meet and create a baby has been boiled down to two words: sperm competition.

On an average, a male produces roughly 525 billion sperm cells over a lifetime and shed at least one billion of them per month. In contrast, women are born with an average 2 million egg follicles, the reproductive structures that give rise to eggs. By puberty, a majority of those follicles close up and only about 450 will ever release mature eggs for fertilization.

According to a new research, since the dawn of the sexes, males have vied with each other to get as many of their own sperm near a fertile egg as possible. Getting more of your sperm closer to an egg means there is a greater probability that it will be you and not your neighbor fertilizing it.

This kind of competition is an evolutionary imperative for males of any species. If a rival's sperm fertilizes an egg, then an opportunity to pass on your genes is lost. Through many generations, as the reproductive spoils continually go to the highest sperm producers, their genes are passed on.

The genes of the smaller sperm producers are eventually weeded out of the population and become a footnote to evolutionary history.

But if it was just a matter of "more is better," then animals of all species would have evolved ridiculously large testicles in a bid to overwhelm the competition. But it's not quite that simple &mdash; numbers are important, but so is proximity.

Fertilizing an egg is not just about how much sperm you can produce. It is also about how close you get your sperm to it. This answer has been provided by Scienceline, a project of New York University's Science, Health and Environmental Reporting Program