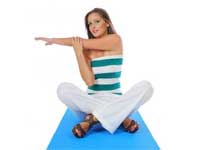 After child birth, it take quite some time for women to get back to action, but a few key exercises can be of good help.

Exercising pelvic floor muscles (PFMs) can enhance arousal and sensation during sex, according to an expert. The pelvic floor is a layer of muscles spanning the bottom of the pelvis that gives control over the bladder and bowel.

"Voluntary contraction of these muscles helps with sensation and arousal during sexual intercourse (and) involuntary contractions of the muscles occur during orgasm,' the Daily Telegraph quoted Royal Brisbane Women's Hospital physiotherapist Rowan Hill, as saying.

&#13;[an error occurred while processing this directive]&#13;

On the other hand, not exercising PFMs could lead to loss of sensation and arousal during sex and difficulty in achieving orgasm. "Just as with all other voluntary muscles in the body, if the PFMs are not exercised regularly they will get weak,' Hill said.

If the muscles are not exercised regularly, women can lose control of basic bodily functions when doing everyday activities such as jumping, sneezing and lifting. Prolonged suffering from the effects of weak pelvic floor muscles could even lead to depression.

Most women exercise their pelvic floor muscles soon after falling pregnant when fronting-up for their first antenatal class. But Hill says the earlier females start, the better it is.

"All who have had children should do regular pelvic floor muscle exercises,' Hill said. "However, there is a school of thought that women should begin doing some PFM exercises earlier in their teenage years," Hill added.


So, now all the new mums, need not hesitate any more for that pleasurable lovemaking, all it takes is some conviction and preparation and you are as good as before.