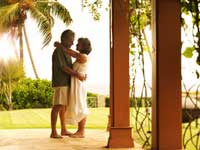 Nature has its own rules that work quite mysteriously. Love and sex are some of the pleasurable mysteries bestowed by nature and its exact pattern of action is still unknown. There are certain facts one requires to know about men and their sexuality in order to rule out certain myths or understand a few behaviors.
If you thought men's sexual response is quite simple and their needs can be met easily, then you certainly need to revise your knowledge of the "birds and bees," for men aren't as simple as they are made out to be.

According to Fox News, here are 10 things that you didn't know about men and sex:

Not all sperm go racing for the egg at once. Once sperm has been deposited into the vaginal canal, some of them are temporarily trapped in a semen coagulate or clot. Eventually, they are decoagulated by enzymes, which set them free to swim about a female's reproductive system. This clotting, according to scientists, is meant to pace the release of sperm into the uterus, increasing the chance that one of these sperms will reach the egg and fertilise it.

It is believed that oxytocin affects females during sex (and breast-feeding). But this cuddle hormone, released by both sexes during intimacy, is also found to influence males. Research from Switzerland found that oxytocin is associated with increased feelings of trust in males.

4. Death during sex has a prototype

While examining the incidence of death during sex, a 1975 study discovered a unique pattern in males: the "deceased is usually married; he is not with a spouse and in unfamiliar surroundings," and death usually occurs after "a big meal with alcohol." Another study in 1989 found further evidence supporting the extramarital sex bit. Fourteen of the 20 cases of "la mort d'amour," or coital death, happened during an affair.

A study in Greece found evidence that the frequency of adult orgasms may have an impact on the incidence of breast cancer in men. In fact, it was also revealed that males with breast cancer had experienced fewer orgasms on average than men without the disease.

It's not the women, but men, who get out of control after a glimpse of the right attractive face and fall head over heels in love immediately, claimed love researcher Dr. Helen Fisher.

As a man becomes increasingly attached to his family, his testosterone level goes down, according to a 2001 Mayo Clinic study. Particularly, fathers experience a significant decline in levels of testosterone with the birth of his child, especially when he holds the baby.

9. Can a bowel movement make for bliss?

In a 2002 study, it was mentioned that a male had a history of orgasmic-like feelings after going to the bathroom. After he answered nature's call, his body went through the rest of the male sexual response cycle. His pulse rate increased as he reached climactic state, followed by relaxation, then extreme fatigue.

Men have a 20 to 1 likeliness against women to practice an "unusual" and often socially unacceptable or illegal behavior, for example exhibitionism.

As 'pressures on pleasures' increase in the urban lifestyle, the responsibility on women to understand a 'man's needs' have grown important.