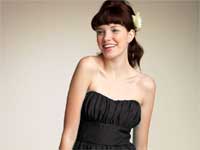 Women should wear clothes that bare 40 per cent of their bodies in a bid to allure men. Keeping the right balance between revealing too much and being too conservative has long been a dilemma for women while choosing the right clothes.

In a study it was noted that in a , 10 per cent exposed their bodies, 15 per cent showed off their legs and 50 per cent their torso. Those who showed off around 40 per cent of their skin attracted twice as many men as those who covered themselves.

However, an excess of skin show turned men off as it suggests that they might be unfaithful.

The most popular women combine the 40 per cent rule with tight clothing and provocative dancing. The 15 per cent that combined all three criteria were approached by 40 men each.