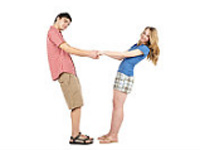 Man gets aroused by woman with sexy looks. The best thing next to the sexy looks, is a great cleavage, says the surveys. Stockings, suspenders, knee-high boots and short skirts also come on the list of the things which men could never resist about women.

For women, a simple smile is enough to get attracted to men. A good sense of humor, is another feature which men require to attract the women. It makes them successful even if they are unattractive with the appeals. Women also always look for other qualities like friendliness, generosity, and intelligence in men, along with the affectionate attitude.

The survey which reveal these facts was conducted by the popcorn makers Butterkist. One among 10 says that they have never met one, they could not take their eyes off.