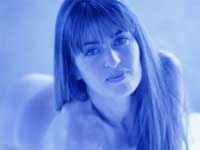 A Brit woman is bored of her sex life because she has 200 orgasms a day.

The rumble of a train on the tracks, the purr of a hairdryer, the rhythmic drone of a photo-copier are all enough to make Sarah Carmen orgasm.

"Sometimes I have so much sex to try to calm myself down I get bored of it. And men I sleep with don't seem to make as much effort because I climax so easily," News of the World quoted her, as saying.

Carmen, from London, developed PSAS after being prescribed anti-depressants at 19. She believes the pills are responsible for her condition.

"Within a few weeks I just began to get more and more aroused more and more of the time and I just kept having endless orgasms," she said.

"It started off in bed where sex sessions would last for hours and my boyfriend would be stunned at how many times I would orgasm.

"Then it would happen after sex. I'd be thinking about what we'd done in bed and I'd start feeling a bit flushed, then I'd become aroused and climax.

Carmen said that the condition that she suffers from can cause her to have orgasm at any time of day.
"Anything can set me off. Even the hairdryers cause funny pulsations through my body," she said.

"As a skin care specialist I have to use tools which vibrate a lot of the time for micro-dermabrasion and they sometimes set me off.

"I find if I'm nervous I' less likely to get over-excited. So sometimes I try to psyche myself up and worry to control my orgasms.

"Some of my regular customers know my problem. But with new clients it's hard to explain.

"I have been in the middle of a treatment and it's happened and I'e had to carry on.

"I was doing a bikini wax and you have to really concentrate and keep your hands very still, and mine go a bit wobbly when I orgasm.

"I had to pretend I had cramp in my foot and just stood there wriggling around on the spot and stifling my moans until it was over," she added.