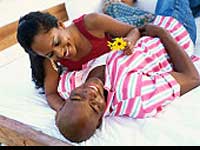 There are certain facts of lovemaking one should believe in when couples get intimate with each other. In one research recently conducted, the study was done one a group of people who were asked different kinds of questions related to that of intimacy.

Most of the people who were present at the study were quite amazed with the results as it was never expected to reach at such a high level of intimacy.
The researchers at the Center for Sexual Health Promotion at Indiana University conducted this study and proved the results stated below.

The use of condoms which is considered to be a prevention against the deadly disease Aids and other sexual diseases came into light at the study where it was found that most of these contestants believed that condoms are used for those relationships where it involves only casual sex and not in relationships where the couple are committed to each other.

Apart from the homosexual art of lovemaking and condoms ,. the most shocking above all was the fake orgasms which the men and women involved in the study revealed. Sources say that the both faked the time of orgasms almost every time when caught in the art of a lovemaking session.