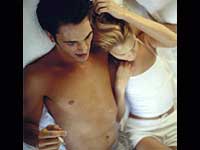 Have you ever come across of people who boast about their long night love making sessions? I am sure that you have and also felt bad for not being one of them.

Now, don't hang your neck in shame because those people who boast about their adventurous night time, is only exaggerating things to prove that they are macho but sadly the fact proves that they are not. After all they are not the owners of the art kamasutra.

According to the research, led by Dr Eric Corty, from the Behrend College in Erie, Pennsylvania, the best love making session will last for 7 - 13 minutes. The research also states that an adequate penetrative sex can be achieved in 3 minutes time.

The study said that if an intercourse lasted between 3 - 7 minutes, then that is more than adequate and if it was shorter than this period, then that was a too short session. If it exceeds 13 minutes then it is too long, which is not really necessary.

"It appears that many men and women hold this fantasy. The results from the present study, by providing a realistic not a fantasy model of sexuality, are useful both in treating people with sexual concerns and dysfunctions, and, with wider circulation, in preventing the onset of sexual dysfunctions," he added.