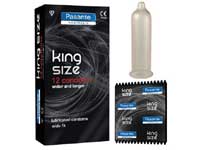 This, according to the company is an initiative to meet what they called an 'overwhelming consumer demand'. On this, a Telegraph quotes Nicola Evans, healthcare buyer for durex fetherlite,durex large condoms,eye care,larger rubbers,tesco, as saying: "These new condoms are designed to allow larger men more comfort than ever before."

The size, too, seems to be massive and the manufacturers are pretty sure that they will get their kind of buyers. A Telegraph report the new condoms, which are 10mm longer than the average 205mm version and 1mm wider, the newspaper said. Evans corroborates: "In the last year there have been more than 200 calls from customers requesting the availability of an extra large condom."

So far, the most popular ranges of condoms at the supermarket are currently Durex Fetherlite and Durex Extra Safe.