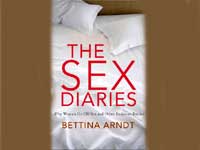 When was the last time you had herd about women going to bed with their hubbys just for the sake of it... making love just for the sake of making love? It's a debate that has happened ever and again. So, every time you were asked the same, how did you opine? It, for sure, must have had been utter disgusting when some one said "yes, women must be submissive" or "Hey, women are meant to please their men" and so on and so forth.

Now, the latest book of sex researcher, Bettina Arndt, works along the same lines. Her book, 'The Sex Diaries: Why Women Go Off Sex and Other Bedroom Battles', which suggests women to go for sex even when they don't feel like doing it,has caused a stir in Australia, sparking dozens of blog posts and stories in newspapers, magazines. There has been a mixed reaction among people. If some are annoyed, there are others who are confused. Prue Hyman, a feminist economist and adjunct professor at Victoria University, has not read the book but was aware of the debate, and she had expressed concern at the idea of men or women having sex just to keep their partner happy. "If women feel the same that they should try their to keep their partner happy in all ways, then I got nothing to say, but, if people are hurt and it makes them feel guilty or do things they don't want to do, the I don't appreciate that at all," Hyman said.

If Hymen takes the mediocre role, there are others who speak ardently against the author. Australian feminist, Eva Cox, has weighed in against Arndt, saying that by bedtime many women just want to sleep and it's just absurd for them to be doing some thing they would not like to do at that point in time. "After an evening of organising kids, dinner, the shopping, the washing, the homework, etc, women are too tired to be wanting sex," Cox said.

However, the author has her own way to retaliate all the comments and the arguments against her. She believes that some of her more strident critics are missing the point. "I'm not saying just do it, lie back and suffer, or lie there like a log. All I'm saying is that if you put the canoe in the water and start paddling, the chances are you may well enjoy the experience. Just try paddling and see what happens," the Sunday Star-Times quoted her as saying. She adds, "Men must 'just do it' too. And 'just do it' doesn't mean having intercourse. It can mean just giving someone pleasure. So it's a two-way street and it just so happens that it's much more common for women to go off sex than men," she added.

Arndt's book, which will be released here in May, is based on the sex diaries of 98 Australian couples some newly in love, some in stable but sexless marriages.